EmeryTop 400 is the world's toughest floor. 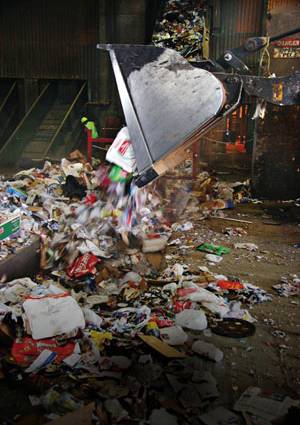 Multiply The Service Life of your Transfer Station Tipping Floors with the World’s Toughest Concrete Topping.

No other type of concrete floor needs the degree of abrasion resistance, impact resistance, or chemical resistance as your transfer station tipping floor or heavy-traffic industrial floor.

EmeryTop 400 floors are the toughest floors in the world. This isn't hype. It's a fact, and we can prove it. EmeryTop 400 was developed for the solid waste industry's transfer station tipping floors.

Why do Other Toppings Fail?

Other toppings address only impacting loads and abrasion. They don't address one of the most important causes of early topping failure: Chemical Attack.

EmeryTop 400 can be placed over existing concrete floors or freshly placed concrete. The average thickness of placement is between ¾ inch and one inch (or more if required).

Why are EmeryTop 400 Floors so Tough?

Most metallic aggregates have a mohs hardness of about 7 to 7 ½.

The major difference between EmeryTop 400 and other toppings is how EmeryTop 400 is chemically engineered to resist chemical attack.

Why EmeryTop 400 and Not Other Toppings?

How Can I Have an EmeryTop 400 Floor Installed?

LATICRETE® has trained a number of concrete contractors in the proper procedure for placement of EmeryTop 400. These skilled crews can schedule the work in a manner that will have the lowest impact on your operation, and will give you a turnkey price. Should you want to use your own concrete contractors, at no cost LATICRETE® will have a factory-trained expert at the job site the day of the placement of the EmeryTop 400.

Multiply the service life of your transfer station tipping floors with the world’s toughest concrete topping: Designed specifically for the solid waste industry.